The U.S. Administration’s strategy to fast-track offshore wind development is exciting for overseas shipbuilders and service providers in the field. Joint ventures meeting Jones Act requirements will support accelerating development. Some question, however, whether ambitious 2030 targets can actually be achieved.

Ulstein group is a front runner. The Norwegian-based company has already provided the design for a rock installation vessel now under construction for a joint venture between Houston-based Great Lakes Dredge & Dock (GLDD) and Netherlands based Van Oord. Now being built at Philly Shipyard and due for delivery in first half of 2024, the ship will be the first Jones Act-compliant offshore wind support vessel to be built in the US. It will be deployed on the Empire I and II wind farms off the coast of New York.

Lars Ståle Skoge is Commercial Director at Ulstein Design & Solutions AS. “There is a great potential for European companies like Ulstein to contribute to develop the offshore wind market in the US, and get a quick start based on the learnings from the European offshore wind industry,” he tells Maritime Reporter.

His Rotterdam-based colleague, Nick Wessels, outlines the company’s strategy of diversification. Ulstein is offering a wide range of offshore wind designs for different tasks, he reveals, but it is also offering scope to upgrade existing vessels.

“We have several designs available that are suitable for U.S. operations,” he explains. “These include feeder jack-up installation vessels, feeder transport units to ship foundations and turbine components to jack-up vessels, and heavy-lift foundation installation ships.” The designs can all be customized to meet specific clients’ requirements.

Head start
It is no secret that Ulstein is in discussion with various offshore wind companies in the U.S. but company executives cannot reveal more details. Wessels says that the selection of an Ulstein design by GLDD provides a head start. The U.S. company required a Jones Act compliant, dynamically positioned vessel that could be constructed in a U.S. shipyard to undertake scour protection on offshore wind foundations.

There are specific requirements for vessels to be deployed in the US. Apart from the Jones Act itself, ships designed for U.S. deployments must also meet U.S. Coast Guard requirements. And, depending on customer and shipyard, designing in imperial units may be a significant plus point, Wessels reveals.

“Typically, we see that build time in the U.S. is longer than in Europe, for example, and we constantly evaluate the possibilities and the best project approach,” he explains. “Our Dutch design office typically works on one-off designs that are fully tailored to client specific requirements. We prefer to work with the shipowner for the concept and basic design as they know what they want to do with the vessel in terms of operation.

“It allows the shipowner to tender with several shipyards,” he continues. “After that, we are happy to support either the selected shipyard in the actual building of the vessel if so desired or to keep supporting the shipowner’s newbuilding team.” 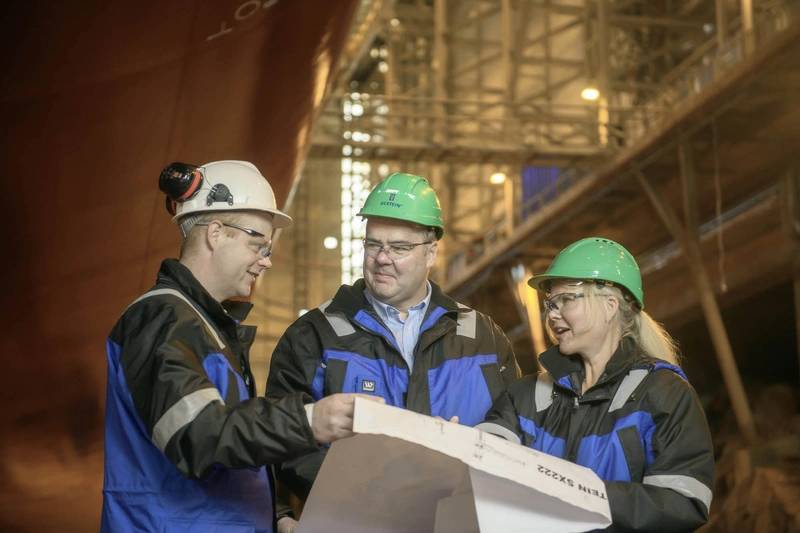 Title XI boost
Analysts believe that the Administration’s mid-year move to boost investment in the offshore wind sector through Title XI funding could lead to a series of new contracts in U.S. yards. It will certainly help to offset higher U.S. construction costs and it could help timing at the front end by finalizing funding faster.
However, experts have already warned that a shortage of suitable installation and support vessels over the second half of the decade is likely, just as infrastructure development is set to accelerate. This could cast doubt on President Biden’s target of 30GW of offshore wind energy by 2030.

Some believe that the Jones Act requirements may also slow down fleet development because U.S. shipyards are new to this potentially lucrative sector. However, others point to joint venture opportunities with designers and builders in regions where offshore wind is already an important component of energy supply.

Fast track
Meanwhile, the opportunity to upgrade or convert existing offshore vessels could provide a fast track. Ulstein has completed a number of conversion projects including the two PX121 platform supply vessels, Esvagt Leah and Esvagt Heidi. Both ships, originally built at Ulstein Verft, returned there in 2021 to be upgraded with more environmentally friendly power systems and converted into emergency response and rescue vessels.

Another more extensive upgrade is currently in progress in Ulsteinvik. The shipyard is currently engaged in the upgrading of the service operation vessel (SOV), Windea Leibniz, built in 2017, which features a TWIN X-STERN. This unique Ulstein hull form provides the vessel, managed by Bernhard Schulte Offshore, with significantly better seakeeping qualities, widening the weather window.

The SOV has already worked successfully for Siemens Gamesa on the Sandbank and DanTysk wind farms in the German North Sea. But her operational window will now be significantly increased by a series of modifications. These include the recently completed installation of an adjustable pedestal for the gangway and a 50% increase in single cabins for charterers, providing accommodation for 60 persons. This will mean a change in the vessel’s status from SOV to construction SOV (CSOV).

Thumbs-up from ships’ crews
The ship’s TWIN X-STERN, in particular, has proved popular with shipboard personnel. Not only does stern-to-the-sea operation often simplify and extend day-to-day working, but it also makes life on board more comfortable in heavy weather. Although the SOV is likely to be redeployed on projects in the North and Baltic Seas, the new features demonstrate how upgrades or conversions could hasten the supply of support ships in the offshore wind sector.

In another upgrade, early in 2022, Norway’s Norside Wind AS opted to convert the platform supply vessel, Farland, into a walk-to-work vessel for the offshore wind sector. The vessel, of Ulstein PX121 design, has been equipped with a motion-compensated gangway, an access & cargo tower, a new accommodation module, and a battery package. The converted vessel will now operate under the name Norside Cetus.

Although Russia’s invasion of Ukraine has transformed the energy backdrop, generating a rebound in oil and gas exploration as energy security becomes the number one priority, there are still significant numbers of support vessels that could be upgraded for operation in the offshore wind sector. And as the U.S. intends to ramp up offshore wind development as quickly as possible, retrofits and conversions could offer an interesting option.

Pomeranian Special Economic Zone – 1st in Poland, 2nd in Europe, 7 in the world

Salvage Operations is Underway in Gibraltar to Remove OS 35…