Josep Maria Cruset announces that the new terminal will surpass the 128,000 passengers of 2019 in two years

Construction of the new wharf was completed in eighteen months 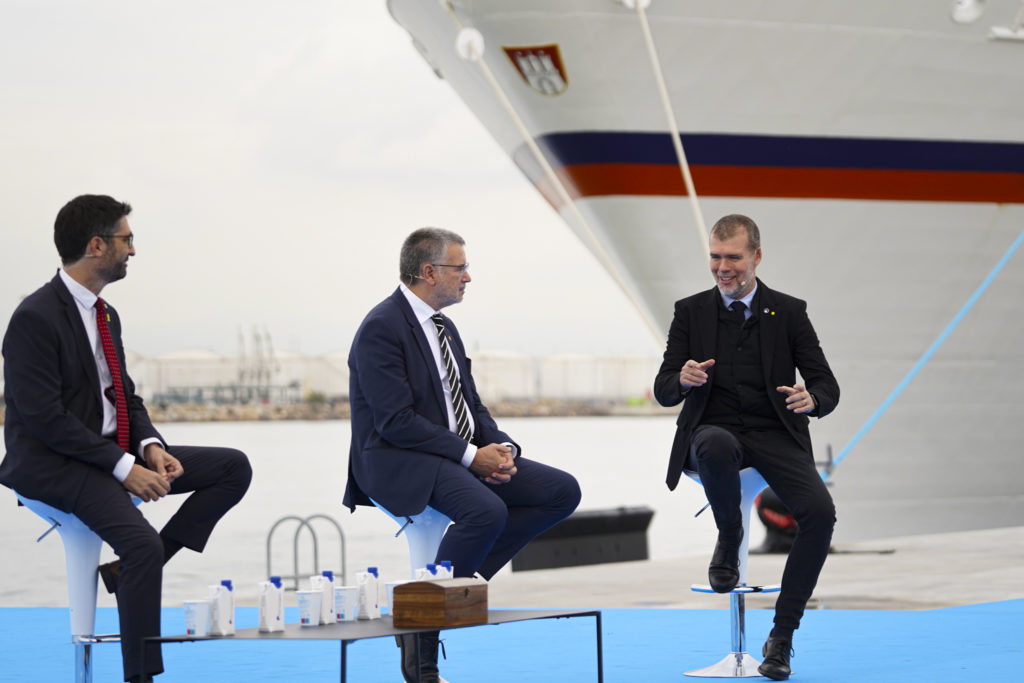 The inauguration of the new Balears Wharf consisted of a welcome speech and a presentation of the Balears Wharf project by the President of the Port of Tarragona, Josep Maria Cruset, who explained the significance of the cruise project for the territory and the work undertaken by the institutional cruise board in its development. To conclude his intervention, Mr. Cruset reviewed the construction phases of the Balears Wharf.

The Balears Wharf project presentation was followed by speeches from the institutional representatives in an innovative social gathering format. The questions replied to by the event’s host, Montse Adan, the director of Port-Ciutat, allowed us to learn more about such issues as tourism, infrastructure, sustainability, and economic recovery. 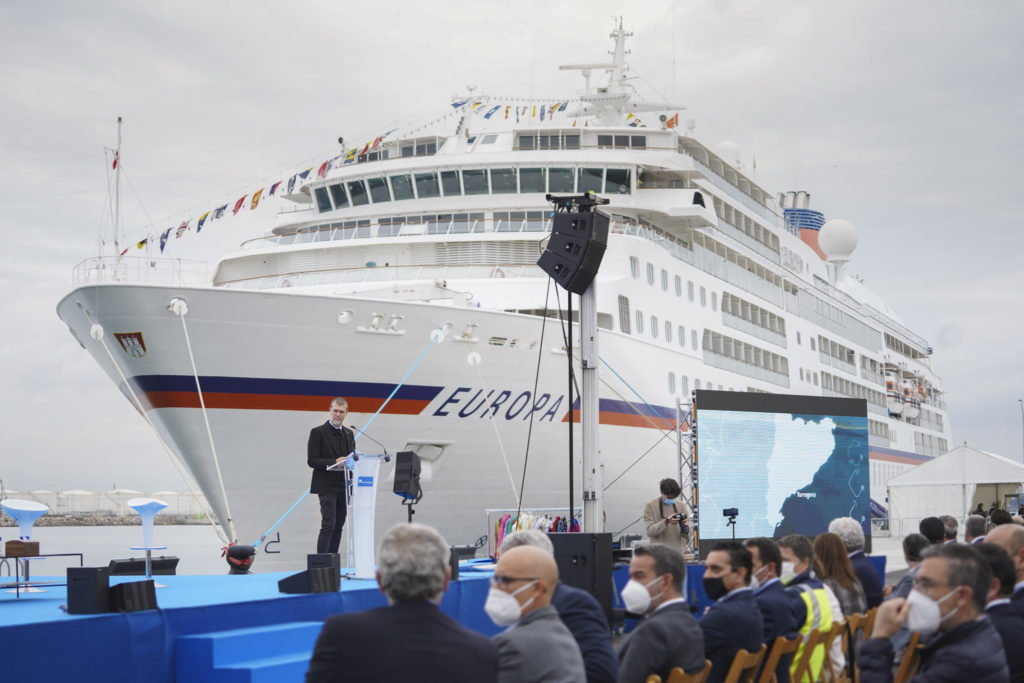 After the different interventions of the representatives of the institutions present, the ceremony of twinning with the Balearic Islands was carried out. Josep Maria Cruset, president of the Port of Tarragona, acted as host of this twinning in which Josep Ribas, Minister of Mobility and Housing of the Balearic Islands Government, and Pere Segura, Mayor of Vila-Seca, presided over a ceremony that consisted of placing a handful of Mallorcan soil in the bowels of the pier that bears the name of the islands.

The institutional part of the inauguration ended with the unveiling of a commemorative plaque by Dvergastein Dag, captain of the cruise ship Europa, the first liner to dock at the Balears Wharf. The cruise ship captain was accompanied in the ceremony by the main authorities in attendance. The final touch to the event was provided by a cast of some 35 artists, dancers, and acrobats as all the attendees were able to enjoy an excerpt from PortAventura World’s, “Around The World” show by Gianfranco Bollini.

Tarragona, on the cruise map

For the president of the Port of Tarragona, Josep M Cruset, “in two years this new wharf will allow us to return to the record figure of 128,000 passengers we reached in 2019”. He added that “the construction of the new cruise terminal would mean having a new convenient functional area of more than 5,000 m2 to provide an improved service to cruise ship passengers in the coming seasons”.

In his speech, Mr. Cruset highlighted the “step forward” represented by this new infrastructure. The Balears Wharf increases the dockside mooring for cruise liners by 700 meters and offers a much more convenient and agile operation. The infrastructure represents a qualitative improvement for cruise activity, as it opens the door to accommodate larger liners and allows more vessels (up to four) to tie up simultaneously.

The investment of more than 30 million euros has increased by 40 hectares (40,000 m2) of the space available for cruise operations. The construction work, carried out by a Temporary Union of Companies (UTE Moll de Balears) formed by FCC and COMSA, began in May 2020, during the first wave of the Covid-19 pandemic. Having overcome all the logistics and sanitary challenges, it was completed a year and a half later.

The new Balears Wharf is prepared to supply electricity to cruise ships while they are berthed. The Port of Tarragona is ready to act with agility when the companies in this sector implement the technology. This service will mean that vessels will not have to burn fossil fuels during their stay in the Port, thus significantly reducing CO2 emissions. In specific terms, the pier has 5 outlet boxes for electricity supply, one of which is already connected to the grid in anticipation of the initial demand from the sector for small and medium-size cruise ships. 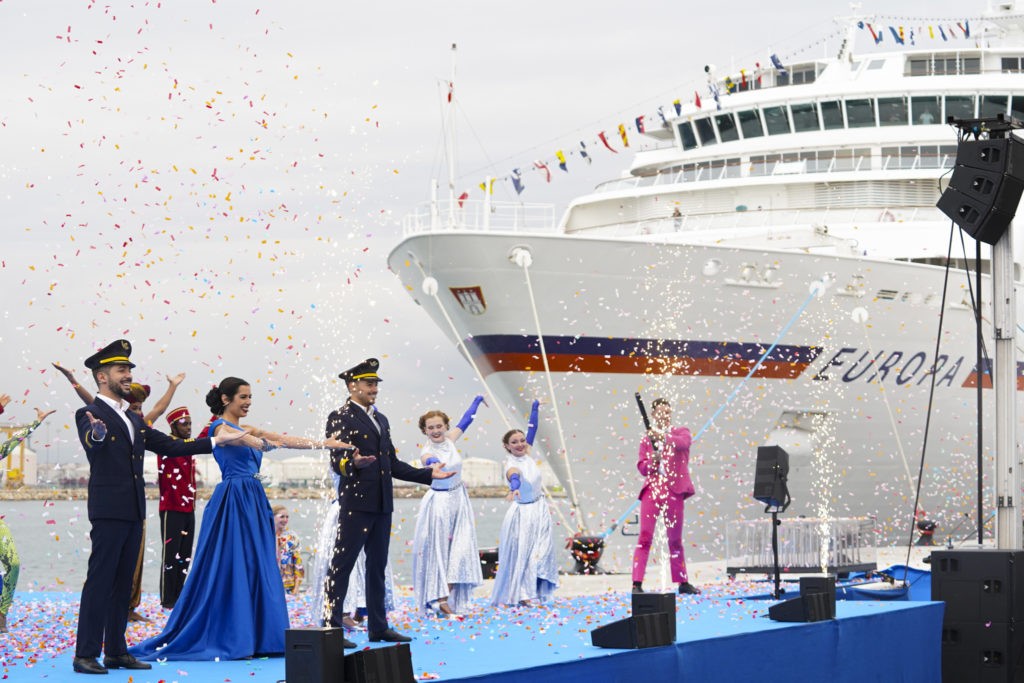 Chronology: 10 construction phases in a year and a half

Work on the Balears Wharf began officially in May 2020, with the arrival of the Mar del Aneto, a floating dock, also commonly known as a caisson builder, to construct the concrete foundations of the wharf. In this first phase, part of the breakwater was also removed from the area where the wharf was to be built and dredging began for the uniform preparation of the seabed for the new construction material and caissons to be placed.

In the second phase, the breakwater material was placed with the barges Darss and Zingst, having completed a total of 500 trips between the Vallcarca quarry (El Garraf) and the Port of Tarragona and dumping 645,616 tons of rocks on the seabed.

Caisson’s placement took center stage in the third, fourth, and fifth phases. This was one of the most complex parts of the project. The 11 caissons were manufactured and placed between August and October 2020 at a rate of one per week. Some 60 people took part in their manufacture, working in shifts twenty-four hours a day, seven days a week. Different port services and personnel, including tugs, boatmen, and linesmen, were involved in executing a complex maneuver to align and submerge the 11 caissons. 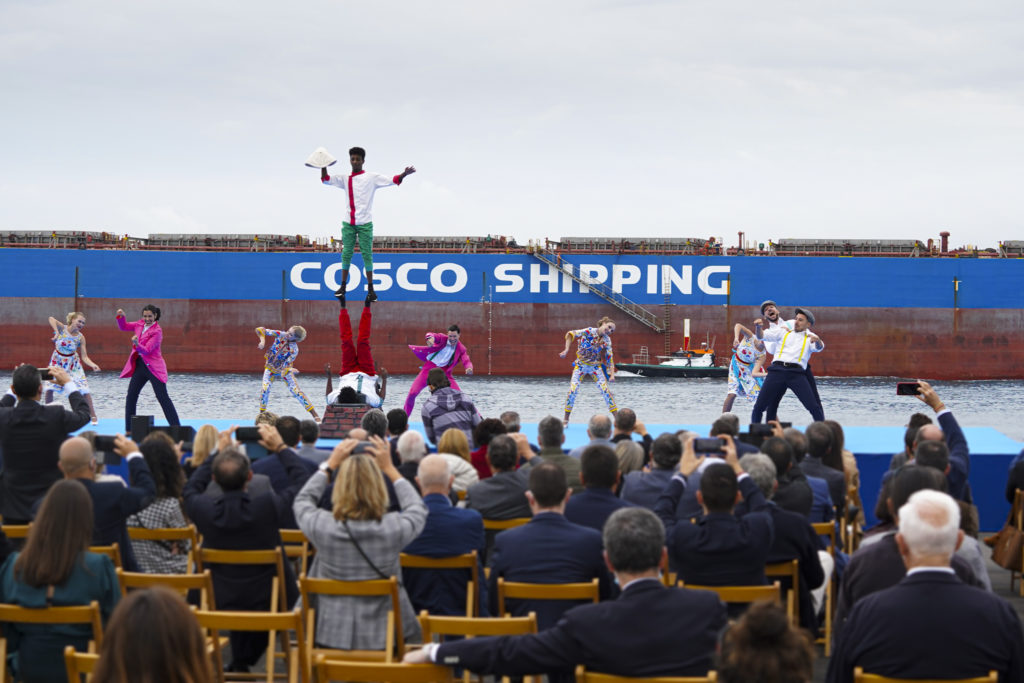 In the sixth phase, in parallel with the placement of the caissons, construction began on the southern and northern breakwaters from the sea and the land by bringing in breakwater material and earth. At the same time, the interior cells of the caissons were filled with stone from the Llorito (Tarragona) and Blanco (Reus) quarries.

In January 2021, the dredger Zheng He arrived in the Port of Tarragona to carry out the tasks of the seventh phase. This vessel took one week to fill the new Balears Wharf with more than 600,000 m3 of material dredged from the seabed of the Cantabrian dock in the interior waters of the port.

Once the wharf had been completely filled with dredged material, it was the turn of the heavy machinery charged with placing and flattening all the sand and earth dumped by the dredger, with the aim of creating and leveling the 40,000 m2 esplanade.

During the month of March, work on the Balears Wharf entered its eighth phase: the installation of the edge beam. This is a reinforced concrete beam 5.40 m wide and 1.70 m thick that runs along the entire length of the outer and inner dock as an enclosure for the esplanades, achieving the correct alignment of the wharf and allowing the anchoring of 33 fenders and 33 bollards.

In the ninth phase, which began during the summer of 2021, work was carried out simultaneously on the completion of the edge beam, the placement of the defenses and bollards, and the start of the esplanade paving. A total of 33 bollards with a holding capacity of 200 tons each have been installed. They will be able to provide a mooring service to the largest cruise ships in the world.

The tenth and final phase consisted of installing lighting, horizontal signage, and other services to allow the Balears Wharf to receive vessels and attend to embarking and disembarking passengers.