Opening remarks were delivered by Dr. Cleopatra Doumbia-Henry, President of WMU who highlighted the efforts of the University to advance women in maritime professions. She noted the importance of the 2019 World Maritime Day Theme of “Empowering Women in the Maritime Community” and the WMU conference under the same theme that took place in April 2019.

The conference brought together more than 350 people from more than 70 countries to discuss this essential support for future development, and resulted in a set of Conclusions that will drive action forward for Gender Equality in maritime and ocean fields.

Although this is progress in the right direction, she maintained that much more needs to be done to promote women in maritime professions and encouraged that all individuals become advocates of the role of women in the maritime and ocean sectors. “Let us all commit to making gender equality a lived reality for all women and girls who have waited long enough. Let us work together to be change makers to continue empowering women through a new, groundbreaking, multigenerational campaign: Generation Equality: Realizing women’s rights for an equal future,” she said. 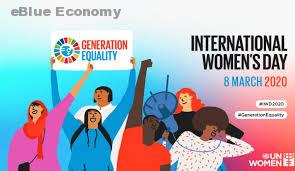 Mrs. Lillemor Darinder, former General Secretary of the Nordic Teacher’s Council, was the guest of honour. In her remarks, she focused on education as the key to equality, highlighting four important goals in ensuring equality in education: 1) education for all 2) good leadership 3) women’s representation, and 4) good values and tolerance.

She noted the diversity of the audience gathered, and emphasized, the important role of the future graduates as leaders in the maritime and ocean sectors. “As leaders, see the win, fight for rights, be a tolerant leader and embrace the future with all its possibilities. Embrace technology, sustainability, and fight for democracy,” she said.

Several students contributed to the programme as speakers, all echoing the importance of being pro-active in advancing gender equality for sustainability as well as the betterment of society overall.

The objectives of the WMUWA are to connect, educate and inspire women in the maritime industry and to promote the interests of female maritime professionals through the creation of an international network for women from the WMU and women involved in other internationally recognized female associations in the maritime sector.

IWD has been observed since the early 1900s and was celebrated for the first time by the United Nations in 1975. It is recognized annually on 8 March.