A development project for the construction of a 136-meter, wind-powered merchant ship is under full sail following the final selection of the wind-assisted propulsion technology for the vessel, an active crowdfunding campaign, and the forging of key strategic partnerships.

The cargo ship, the construction of which is scheduled to begin this year and to enter into service in 2024-2025, will save 80 to 90% of fuel compared to a conventional ship of the same size.

Following technical studies carried out by Chantiers de l’Atlantique, Neopolia, Mauric, and D-Ice, the ship’s rigging will consist of two “Solid Sail” folding rigging systems, including two masts of 76 m in height, each equipped with the “Solid Sail” sail technology of 1,100 m² and a flexible jib of 400 m², with a total sail area of 3,000 m².

Obtained calculations show that the “Solid Sail” rig, with its rigid sails, will provide the equivalent or even better performance than the 4,200 m² of flexible sails initially planned for the duplex rig, thanks to the thinness and vertical elongation of the structure, as well as the reduction of the masking effect of the sails.

The expected lifetime of the sail is 25 years, which will reduce maintenance costs compared to soft sails. The production and installation of this innovative rigging by Chantiers de l’Atlantique on the hull of the Neoliner will boost the local economy and occupy many trades at different stages

“The expertise of our technical partners and local players, combined with Chantiers de l’Atlantique’s Research and Development, give the project a synergy of skills, which made this choice possible. 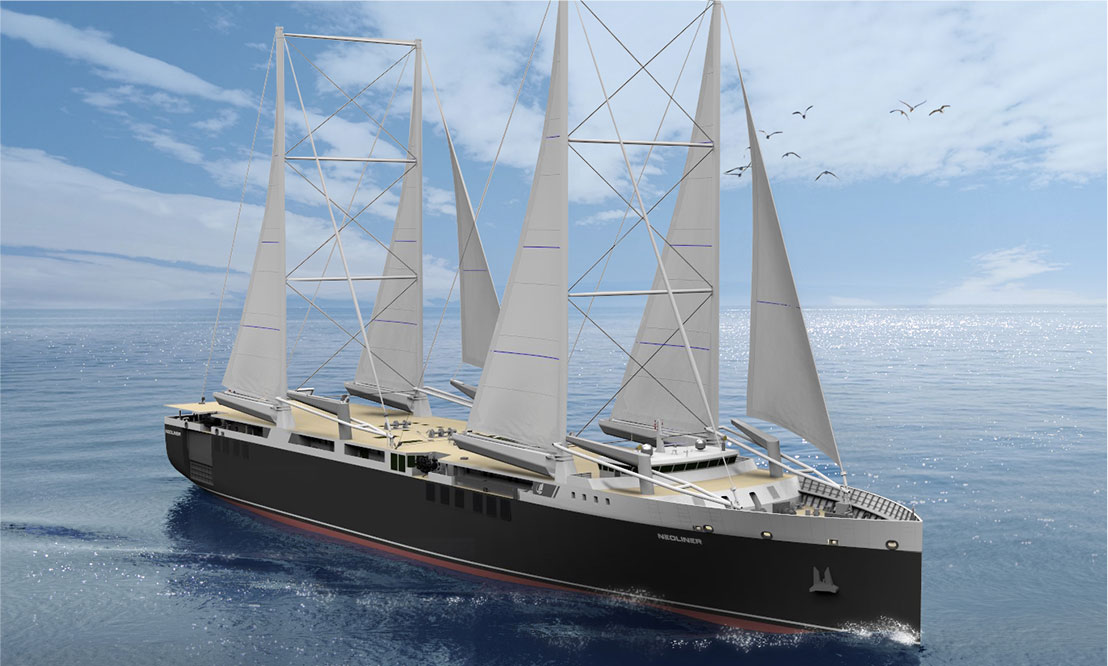 The continuous work on the general design of the ship over the last few months by Mauric, Neoliner’s architect, has enabled the architecture to be adapted to this new rig, in order to ensure its integration on board.

The studies have confirmed the technical feasibility of the major evolution of the rig, both from a structural and stability point of view and in terms of the general organization of the ship” explains Jean Zanuttini, President of NEOLINE.

A crowdfunding campaign was launched in January 2022 to support the project and will remain active until June 12, 2022, on the WiSEED platform.

EUR 1million is sought for this crowdfunding collection, which is part of the fundraising of EUR 3.3million from financial investors. EUR 700 000 has already been raised and more than 800 people have already mobilized.

In order to create the conditions for the necessary contractual negotiations, the beginning of the construction of the Neoliner has been postponed to the fall of 2022.

This is due to the interruption of international trade, with the raw materials market being impacted by the geopolitical situation and the war in Ukraine since the beginning of March in particular, and before that, by the global pandemic since 2019.

“The project is adapting to a rapidly changing world and, although the financial and industrial closing is taking longer than initially planned, its relevance is being strengthened and we are still aiming for commissioning by 2024/2025” explains Zanuttini.

For strategic reasons, the Sogestran group has decided to withdraw from NEOLINE’s shareholding and has provided transitional financial support for the integration of a new reference partner. NEOLINE has approached another shipowner with whom discussions are in progress.

An L.O.I. has been signed allowing the project to continue towards the construction of the first Neoliner.