In the Heart of the Sea is a 2015 historical adventure–drama film directed and produced by Ron Howard and written by Charles Leavitt. It is based on Nathaniel Philbrick‘s 2000 non-fiction book of the same name, about the sinking of the American whaling ship Essex in 1820, an event that inspired Herman Melville‘s 1851 novel Moby-Dick. An international co-production between the United States and Spain, the film stars Chris Hemsworth, Benjamin Walker, Cillian Murphy, Tom Holland, Ben Whishaw, and Brendan Gleeson.

The film premiered in New York City on December 7, 2015, and was released in cinemas in the United States on December 11, 2015, by Warner Bros. Pictures. In the Heart of the Sea received mixed reviews from critics, and was a box-office bomb, grossing $93 million against a $100 million budget.[3] 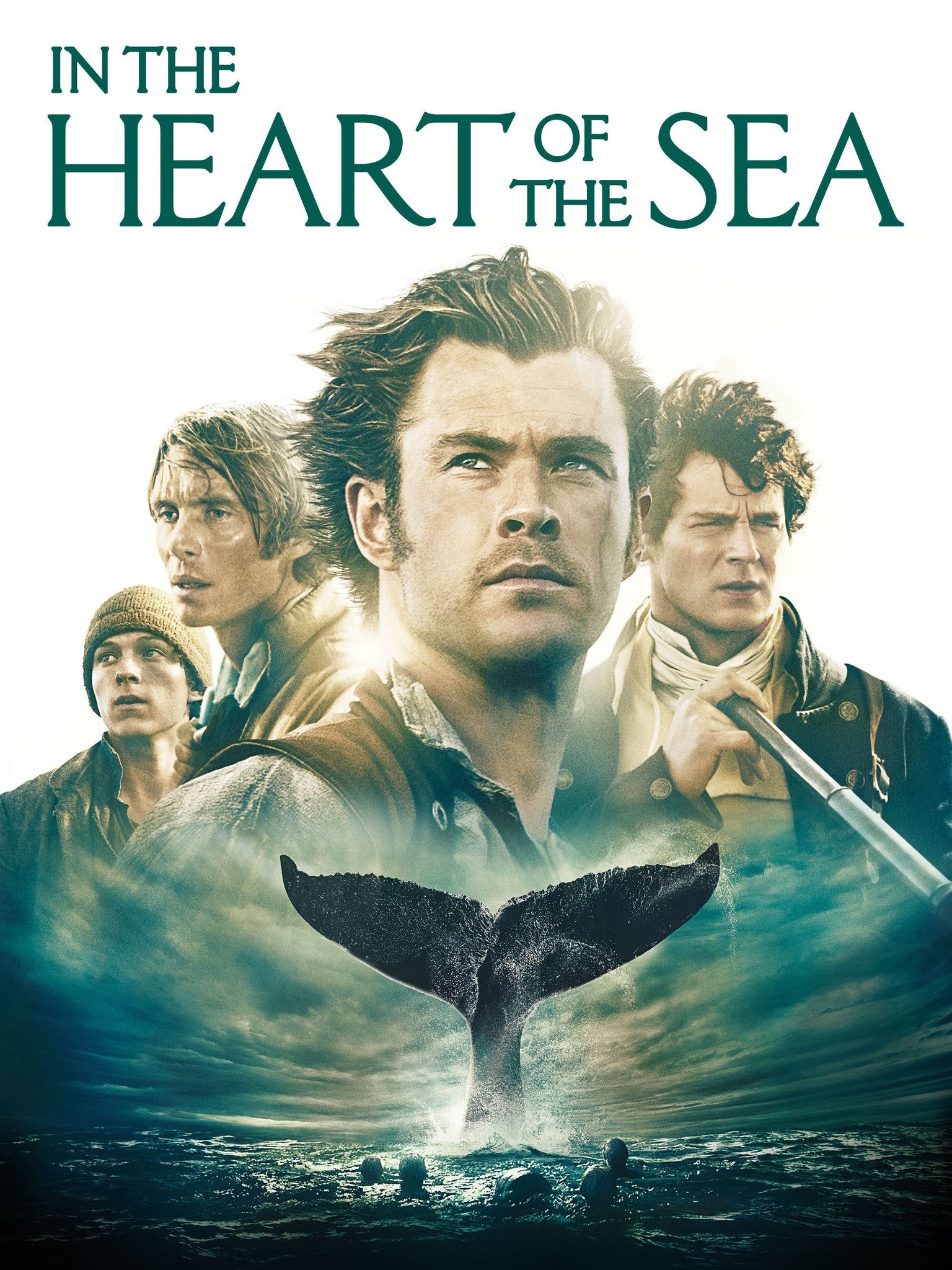 The Tragedy of the Whaleship Essex” is about the real incident that partly inspired Herman Melville’s novel “Moby-Dick”—the 1820 destruction of a whaling vessel by a murderously angry sperm whale.

You could say that it’s about the relationship between nonfiction and fiction, though here things get dicey: the film’s story is told in a characteristically clunky framing device to the young Melville (Ben Whishaw), even though in reality Melville wrote his novel without ever visiting Nantucket.

(Howard told Charlie Rose that Melville interviewed the last survivor of the wreck, though, so there may be a tether of fact here.) You could say the film is about humankind’s collective, slowly dawning realization that whales are not big fish but intelligent mammals and that the whaling industry was (and still is) engaged in interspecies genocide—a notion teased out in shots of the vengeful whale and other members of its pod floating peacefully with their calves underwater, then surfacing to stare accusingly at the humans. 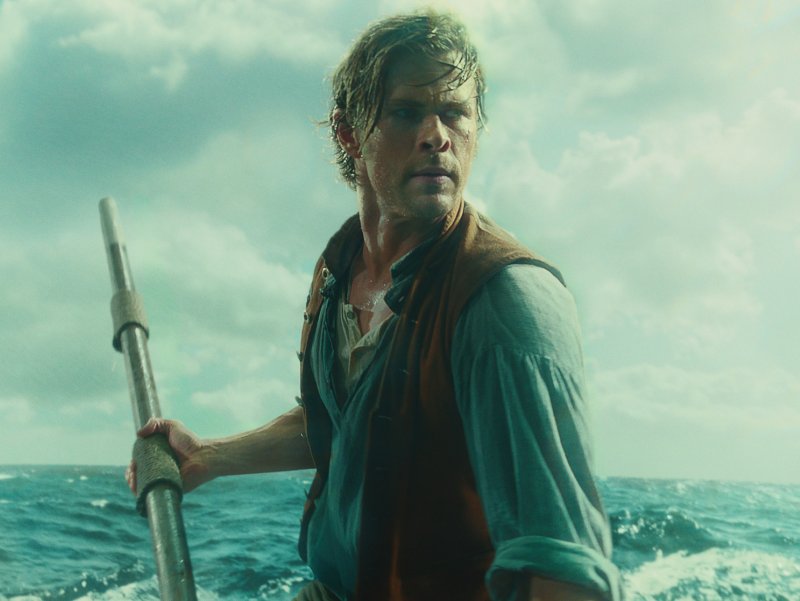 You could say it’s a survival story, about a group of shipwreck survivors (led by an unqualified rich-boy captain, played by Benjamin Walker, and Chris Hemsworth’s macho and resentful first mate) dying of hunger and thirst in lifeboats. Lastly, you could describe “The Heart of the Sea” as a story of corporate ethics: the final section shows the whaling company urging survivors to lie about what happened, for fear that insurance carriers won’t cover them if they hear that a whale is capable of destroying a huge ship.

In 1850, author Herman Melville visits innkeeper Thomas Nickerson, the last survivor of the sinking of the whaleship Essex, offering money in return for his story. Nickerson initially refuses, but then finally agrees when his wife intervenes.

The story turns to 1820: a whaling company in Nantucket has refitted the Essex to participate in the lucrative whale oil trade and 14-year-old Nickerson signs on as a cabin boy. The owners hire veteran whaler Owen Chase as the first mate, though he is disappointed not to receive a captain’s commission. The captain is George Pollard, an inexperienced mariner from an established whaling family who envies Chase’s skill and popularity. Chase and Pollard clash, leading Pollard to sail into a storm against Chase’s advice. The two agree to put their differences aside, rather than risking their reputations by returning to port without profit, and soon, the crew kills their first bull sperm whale.

Three months pass with no further successes, and Pollard realizes that the Atlantic Ocean holds no sighting of whales. The Essex sails past Cape Horn to the Pacific, hoping for better luck in catching one. In Atacames, Ecuador, the officers meet a Spanish captain who tells them his crew found the bountiful “Offshore Grounds” 2,000 miles to the west, but claims that a vengeful “white whale” destroyed his ship, killing six of his men. Dismissing the story as a myth, Pollard and Chase lead the expedition west. They find the undisturbed grounds, but when they launch the whaling boats, the white whale, a massive albino bull sperm whale attacks, damaging the boats and turning on the ship. 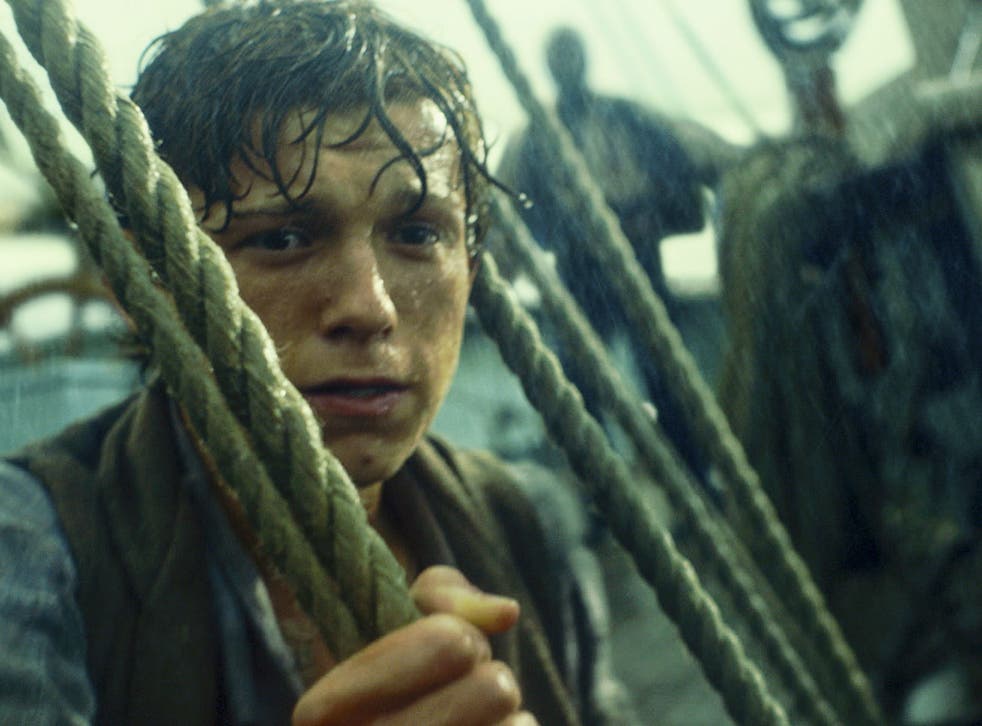 Chase harpoons it from the Essex’s deck, but the whale rams the ship’s wooden hull, killing two men. With the hull stoved and pumps not working – the crew abandons the sinking Essex in the three intact whaling boats and must sail hundreds of miles to shore with very limited supplies. The whale follows and attacks again, but they escape to the tiny Henderson Island. While gathering food, Chase discovers the corpses of earlier castaways and concludes that the crew will soon die on the island before another ship passes by. Four men decide to stay, while the rest set sail again on the boats with hopes to find land. Soon after, one of the men dies, and the remaining crew reluctantly decides to cannibalize him.

The film contains much stylized seafaring violence with brief gore, mature themes, including cannibalism and suicide, a fleeting bawdy image, about a half-dozen uses of profanity as well as a single crude and several crass terms. The Catholic News Service classification is A-III — adults. The Motion Picture Association of America rating is PG-13 — parents strongly cautioned. Some material may be inappropriate for children under 13.