Geoff Hunt is a leading figure in marine art. According to Artist Partners Ltd, he is ‘one of the world’s finest painters of 18th and 19th-century ships.

Hunt is perhaps best known in popular perception for his depictions of naval scenes adorning the covers of Patrick O’Brian’s bestselling ‘Aubrey-Maturin novels, a connection he began in 1988. He also has painted scenes from C.S. Forester’s Horatio Hornblower series and Julian Stockwin’s Thomas Kydd series. 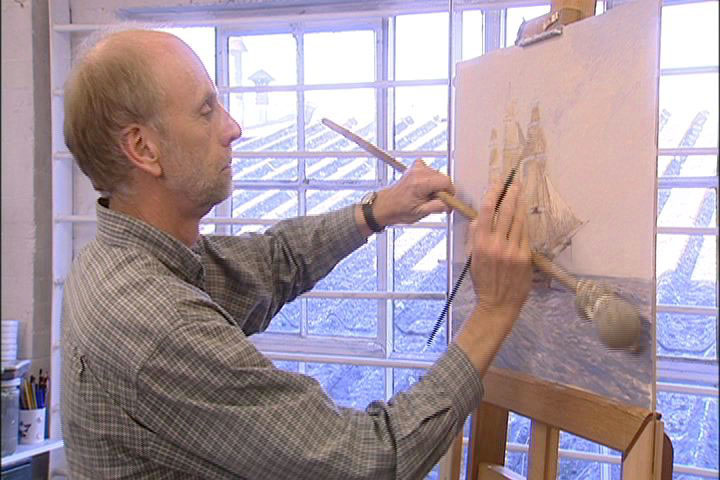 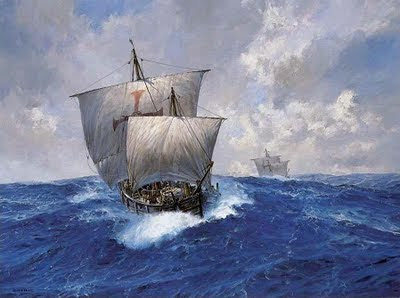 Hunt attended Kingston and Epsom Schools of Art, 1966–70, where he studied graphic design. Upon graduation, following a couple of years in advertising, Hunt established himself as a freelance artist and designer. Hunt was Art Editor for the popular Warship quarterly journal, from its inception in 1977 until 1979

Geoff made much of the fact that you never know exactly how long an unrehearsed painting will take and that the time available for the demo would not be enough.

Geoff had intended to paint a rainy Queenborough (Isle of Sheppey) but the day’s miserable weather made him go for a nice warm St. Tropez.

After looking at a few photos (which gave him colour hints) he had picked one he had not used before: with not very good colour but an interesting roof and yacht shapes.

He looked carefully at the various verticals (masts, chimneys etc.) and decided to trim it into a portrait shape and copy it in black and white onto A4 pape

This cut off some of a useful foreground yacht but he only needed to shift more into the centre to balance a big one on the other side. That could be dealt with in his pencil sketch. 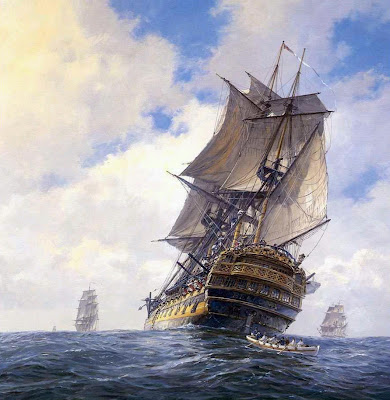 Geoff Hunt is a former President of the Royal Society of Marine Artists ( 5 years )His work is represented in public and private collections worldwide, and Geoff is an expert on the Navy of Nelson and Patrick O’Brian.

In 2004 The Marine Art of Geoff Hunt was published to much acclaim, presenting over 100 of the artist’s key works from a thirty-year career. Geoff’s studio is on the site of Nelson’s house at Merton Place.

His own basic Plein-air painting philosophy is to rush the job without adequate preparation and rely on luck, rage and sometimes self-harm to pull him through.

This technique served him badly when he painted oils outdoors and has done even worse since 2013 when he switched to using watercolour. 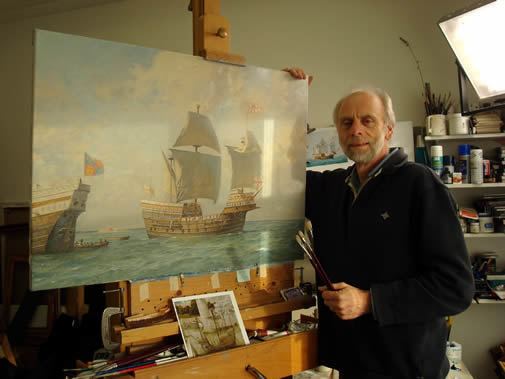 The story of the struggle he had with the maddening and difficult but occasionally brilliantly rewarding medium of watercolour was the subject of his monthly diary in The Artist magazine which ran throughout 2014 and 2015. He thinks the one essential requirement for painting outdoors, above all in watercolour, is inexhaustible optimism ( this time I’ll really get it right! ) coupled with a good umbrella.