In February 2022, the Council of the European Union (E.U.) gathered in Brussels to discuss the extension of the Coordinated Maritime Presence (CMP) concept to the North-Western Indian Ocean.

First piloted in the Gulf of Guinea at the beginning of 2021, the CMP is a flexible tool to enhance maritime security engagements by promoting shared awareness, analysis, and information in the maritime space among member states.

The Council thus concluded that the E.U. should enhance coordination and cooperation with the European Maritime Awareness in the Strait of Hormuz (EMASOH) surveillance mission and deemed the North-Western Indian Ocean, a region stretching from the Strait of Hormuz to the Southern Tropic and from the north of the Red Sea toward the center of the Indian Ocean, a “maritime area of interest” (MAI). 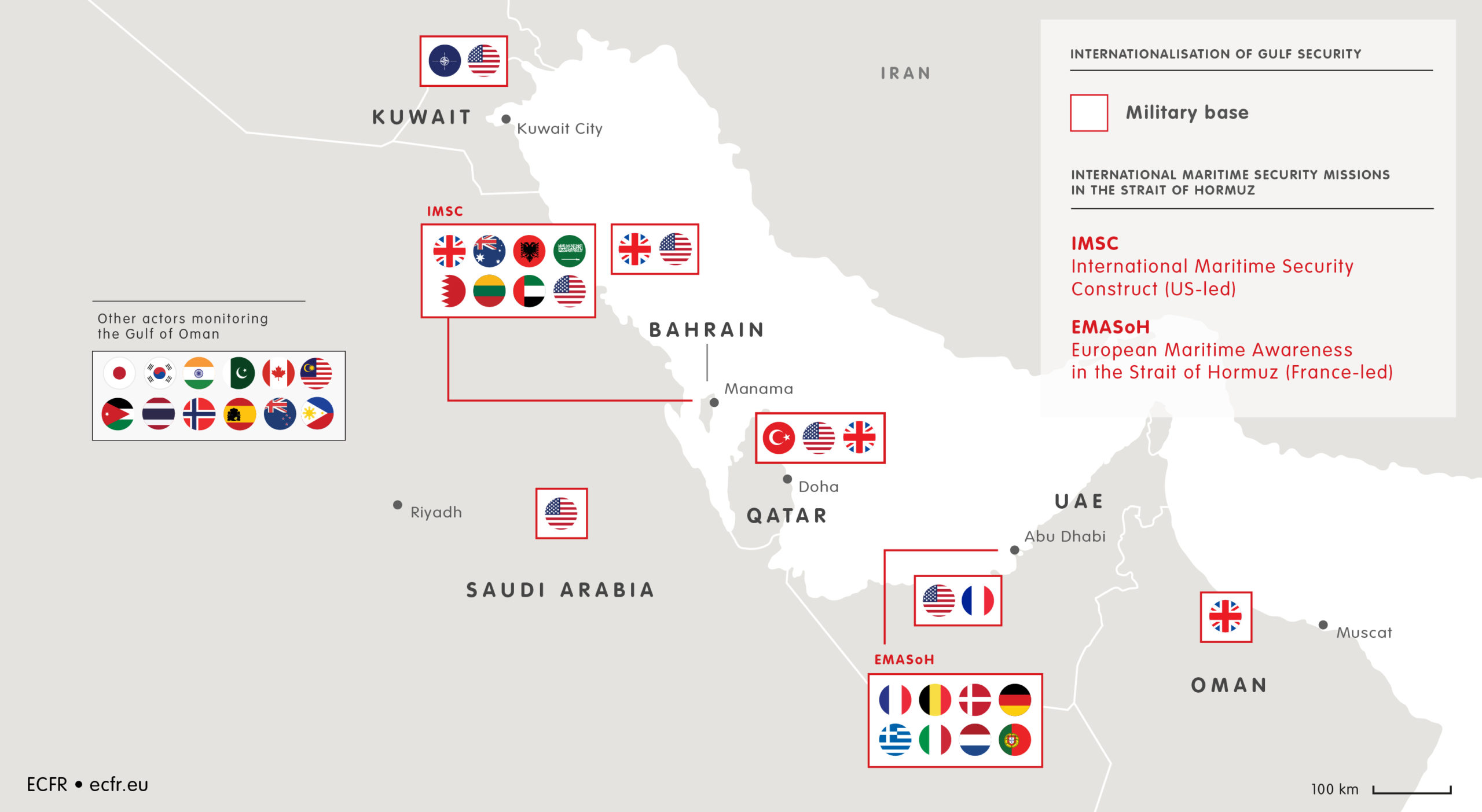 These decisions — and, especially, the MAI designation — constituted a rare consensus among E.U. member states that Gulf maritime security is a strategic interest for Europe as a whole.

EMASOH, a French initiative, was launched in January 2020 to promote regional de-escalation in the Gulf and ensure freedom of navigation in the seas around the Strait of Hormuz.

Headquartered at the French naval base Camp de la Paix in Abu Dhabi, it was set up in response to the Iranian attacks on tankers and commercial ships in UAE waters and the strikes on the Abqaiq and Khurais oil facilities in Saudi Arabia, both in 2019. Shortly after the attacks, in January 2020, Belgium, Denmark, France, Germany, Greece, Italy, the Netherlands, and Portugal launched EMASOH as a maritime surveillance mission, arguing that such incidents were undermining freedom of navigation in the Gulf and the safety of ships in the Strait of Hormuz. EMASOH’s military component, Operation AGÉNOR, includes the eight E.U. countries plus Norway and patrols the waterway with seven vessels and one aerial surveillance unit. Since March 2022, the operation has been under Belgian command. Seven of the nine participating countries are currently present in the Abu Dhabi HQ, while Portugal and Germany support the mission’s diplomatic track.

The Council’s decision to officially embrace EMASOH, which operates in parallel to the U.S.-led International Maritime Security Construct (IMSC), is a small step in the direction of Europeans acknowledging that they won’t always be able to rely on the United States to defend their interests, even in the Gulf, long perceived in Europe as an “American lake.”

Whither a European security role in the Gulf?

This is not to say that the U.S. is leaving the Gulf or the Middle East more broadly. Even amid some downsizing over the past couple of years, the U.S. still has more than 13,000 troops and large military bases in the Gulf and it plays a central role in a number of multilateral security missions, including in the maritime space. 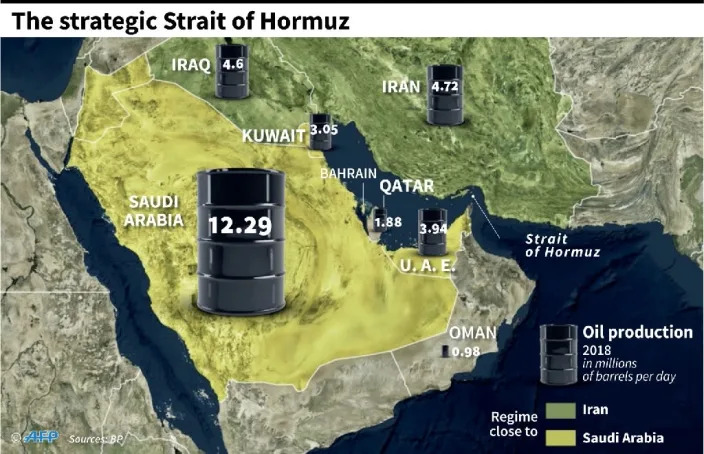 However, the U.S. is certainly recalibrating its involvement, driven by war fatigue at home and shifting interests abroad, including a pivot to contain China in the Asia-Pacific and to end American dependence on Middle Eastern energy supplies, which has long been the primary reason for its regional posture.

Conversely, in light of Russia’s invasion of Ukraine, Europe is seeking to strengthen its energy ties with Middle Eastern suppliers to overcome its dependence on Russian oil and gas — an effort that is only likely to ramp up if the E.U. moves to ban Russian oil imports. This has driven European outreach to Algeria and Morocco, as well as a push to reconsider new energy infrastructure to facilitate imports from countries in the eastern Mediterranean.

Some European capitals are also eyeing Iranian gas with renewed interest and are thus doubling down on efforts to revive the Joint Comprehensive Plan of Action (JCPOA) as soon as possible.

While North Africa, Iran, and the eastern Mediterranean are feasible long-term options, current energy infrastructures in these places are either derelict or non-existent, precluding a quick fix for Europe’s energy crisis.

The real jackpot would be securing an energy partnership with the Gulf monarchies, which could increase supplies to Europe much more quickly and have the capacity to stabilize the global energy market at the expense of Russia. Officials from Italy and Germany have already secured supply deals with Qatar, while France’s TotalEnergies will begin shipping Emirati oil to Europe this month.

Also this month, the E.U. plans to release a new energy strategy that will feature a green energy partnership with the Gulf monarchies, expanding on existing hydrogen deals between E.U. member states, Saudi Arabia, and the UAE. European policymakers understand that if the seas around the Arabian Peninsula become a conduit for a growing share of vital energy shipments to Europe, Gulf maritime security will become a strategic interest for the E.U.

This maritime space is already of strategic importance for Europe economically. More than 10% of global trade passes through the Strait of Hormuz and the Bab el-Mandeb Strait, together with the Suez Canal.

A large share of this trade either comes from or goes to Europe. Not only do European countries have significant trade relations with Gulf Cooperation Council (GCC) member states, but some GCC ports are also becoming key nodes of economic connectivity between Asia, Africa, and Europe.

It has also prevented European leaders — even those who do have links to Gulf monarchies, such as France’s President Emmanuel Macron — from persuading Riyadh and Abu Dhabi to unequivocally side with the U.S. and Europe against Russia amid its invasion of Ukraine.

A more meaningful role for Europeans as security providers in the maritime space also fits well with the upcoming comprehensive E.U.-GCC policy partnership document, to be published later this year, which will encourage more joint training and naval exercises. The E.U.’s decision to become strategically more involved in the maritime security of the North-Western Indian Ocean will have several future implications.

The CMP will enable the E.U. to share intelligence and operationalize coordination in the North-Western Indian Ocean, effectively establishing links between EMASOH and Operation Atalanta, an E.U. mission to combat piracy off the coast of Somalia. Turning the Strait of Hormuz and the Red Sea into one integrated area should enhance the capacity to secure both.

The E.U.’s embrace of EMASOH is the ultimate green light for a new generation of ad hoc, flexible missions that can be deployed in sensitive areas for E.U. interests, offsetting the lengthy decision-making process of the E.U.’s Common Security and Defense Policy (CSDP).

This category of core group missions, which includes Operation Takuba in the Sahel and the European Naval Engagement in the Indo-Pacific, will become even more common and enhance the European projection capability.

Furthermore, since EMASOH now has a clear mandate from the E.U., both existing members, such as Germany and Portugal, and other countries that were not part of the initial group might be more inclined to contribute militarily.

EMASOH will need to beef up its naval deployments and enhance its aerial surveillance capabilities if it is to become credible amid heightened multipolar competition in the region.

For now, Gulf countries are not in a position to provide maritime security around the Strait of Hormuz and the Arabian Sea on their own. They continue to argue that the area is of global interest and therefore they should not be the sole actors responsible for maritime security.

Given this, the risk is that Gulf actors will invite more and more international partners — including rivals of the U.S. and Europe, such as China and Russia — to patrol the waters. A more significant European presence may deter regional actors from such moves while allowing the U.S. to relinquish some of the security burdens that it wants to offload.

Finally, the European reference to the North-Western Indian Ocean indicates they might soon go beyond the existing operational areas of Atalanta and EMASOH. Indeed, some E.U. countries — specifically, France — have argued that the whole Red Sea and the Bab el-Mandeb Strait are vital to European interests.

By protecting these waterways, E.U. countries could reap three benefits in the short, medium, and long term. First, they would consolidate a European presence in the Red Sea, where Russia has been seeking to make inroads. Second, keeping an eye on Bab el-Mandab and Yemen’s Red Sea coast might give Europeans more of a voice in the context of the Yemen conflict.

Third and finally, it could also potentially reduce the Houthis’ ability to use threats against international shipping as leverage against the diplomatic process to end the war.