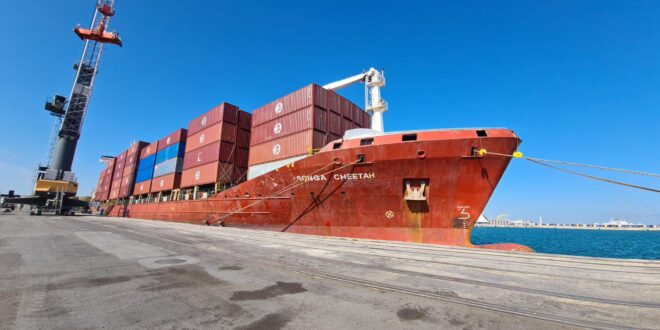 eBlue_economy_Container lines between the Far East and the Mediterranean are increasing

Container lines between the Far East and the Mediterranean are increasing

With the entry of the Italian Rif Line into the agone, the overall capacity also increases (however far from the peaks of 2017), while the average capacity of the individual ships is reduced. Cma and Msc strengthen the Europe-Australia route

At the end of July 2022, there are twelve weekly roundtrip container services in the Mediterranean-Far East traffic.

This was stated in a report by Dynaliners, according to which “these are two more routes than last year, since Zim has re-entered traffic as a ship operator with an autonomous connection, replacing the 2M slots, and the Italian Rif Line has Kalypso established, which operates a single service along this corridor.

With only three small ships operating on a three-weekly schedule, the latter provides very limited capacity. Overall, the annualized commercial capacity increased by 6% to 5.5 million Teu compared to the previous year.

This figure does not take into account the effect of departures canceled due to the lack of onboard capacity.

Following the addition of some small ships to the fleet, the average size of the ships decreased by 800 Teu, passing to 13,600 Teu.

The ranking is led by the three alliances, 2M, Ocean Alliance, and THE Alliance, in that order. Although the annual commercial capacity has grown substantially, it is still below the peak of 5.7 million Teu in 2017.

With an average onboard capacity of 13,600 Teu, the size of the vessels has shrunk from last year, but I’m still at the second highest level ever ”.

Meanwhile, Cma Cgm and Msc have decided to strengthen the fleet of their joint Europe-Australia service (called Nemo / Australia) from fourteen to fifteen ships of approximately 9,000 Teu. The extra ship will be provided by the French carrier.

Previous IMO : Maritime security support for Mauritius
Next Adani Ports has started the construction of a new container terminal at Mundra.