In 2020, the Korean Government launched a MASS development project with a budget of 160 billion Won (approx. 132 million USD).

In the transportation industry, Tesla pioneered self-driving cars with the autopilot function, diver-less metro-rail services functioning smoothly in the city of Copenhagen, while most airplanes fly on autopilot mode except for landing and take-off. Seaborne transportation is a rather latecomer in the autonomous technology scene.

From a design and implementation perspective, maritime autonomous surface ships (MASS) are of course feasible, largely due to the presence of fewer physical objects (e.g., other vessels) on the high seas.

Although physical objects increase significantly when a ship is approaching a port, or it sails in coastal areas, they can still be dealt with through the implementation of advanced collision avoidance algorithms.

Formally, the development of MASS gained momentum after the Maritime Unmanned Navigation through Intelligence in Networks (MUNIN)Footnote 1 project was launched in 2012, in collaboration with eight partners from five European countries, partly funded by the European Commission.

The project mainly investigated the feasibility of MASS through a case study of a dry bulk carrier. Since then, several MASS projects have been initiated by national and international organizations.

The Norwegian Government funded several research projects on MASS development over the last decade, and several projects have also been funded by the European Commission in recent years.Footnote 2 Amongst the latter projects, AUTOSHIP is the largest one, having received 20 million EURO funding in 2019.

In 2020, the Korean Government launched a MASS development project with a budget of 160 billion Won (approx. 132 million USD). The aim of the Korean project is to develop MASS that can be operated remotely without a crew on board, by 2025, in order to achieve at least 50% market share in the first wave of MASS commercialization.

Recently, a group of Chinese universities and private companies have registered the majority of the patents related to autonomous ship technologies. In 2019, the Japanese shipping company NYK Line reported the successful completion of MASS voyage trials from Xinsha, China, to Nagoya, Japan, and a couple of days later from Nagoya to Yokohama.

The company expects half of its fleet to be MASS by 2040. Further, Rolls-Royce demonstrated the feasibility of the first MASS ferry in December 2018, in collaboration with Finferries of Finland.

Given the pace of technological development and reported MASS trails in recent years, there is little doubt about the upcoming deployment of MASS in commercial shipping.

As with every innovation in economic history, here too resistance to change is significant. In 2021, the International Longshoremen’s Association (ILA) stated that they will not work on ships without crew onboard.

These and more were exemplified by the heated discussions, at a panel on autonomous shipping, at the 2021 annual conference of the International Association of Maritime Economics (IAME).

MASS is likely to penetrate commercial shipping initially through smaller vessels on shorter distances. Ocean-going MASS deployment is likely to take a couple of decades more, and the development of the appropriate regulations, at national and international levels, will be one of the major stumbling blocks.

To date, only a few countries, notably in Europe, have made progress on MASS regulations at the national level. For example, the Norwegian Maritime Authority has already published guidelines for the construction and installation of MASS. Footnote 3

The studies in this MEL special issue on MASS demand a serious rethinking of Levels of Automation (LOA), curricula of Maritime Education and Training (MET), and port-ship interactions.

They also offer a comprehensive smart-port architecture, to enable MASS; an assessment framework for cyber security risks; a MASS ecosystem for value creation, and factors enabling the prioritization of MASS adoption.

The studies provide detailed insights on ensuring MASS in real-world shipping in the future. 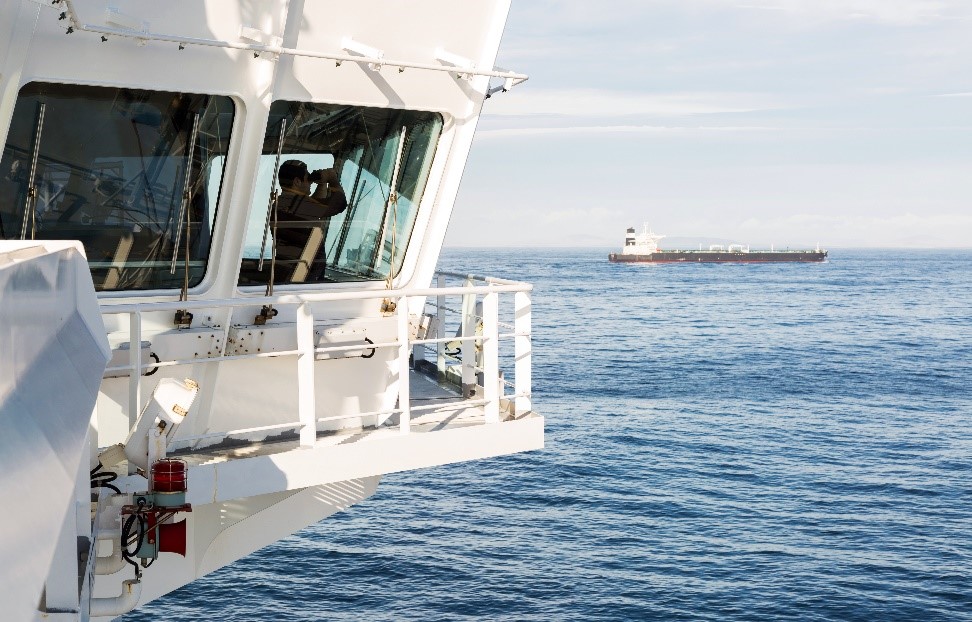 A bibliometric review of MASS research

To map recent developments in MASS literature, we carried out a bibliometric analysis of relevant studies published up to December 2021. To identify relevant studies, a systematic literature search was conducted through the Web of Science (WOS) and Scopus databases. In the extant literature, technology development studies have received most of the attention, while there is a dearth of studies on MASS from the maritime economics and logistics perspective. This special issue focuses particularly on the latter areas.

As several journals are indexed by the two databases, 49 duplicates were removed, leaving us with a sample of 152 studies for bibliometric analysis.

The Bibliometrix package of the R software was used for analysis. The sample of 152 studies was published between 2015 and 2022. They were published in 47 journals and authored by a total of 351 authors. There were 20 single-author documents, with the rest being co-authored studies. 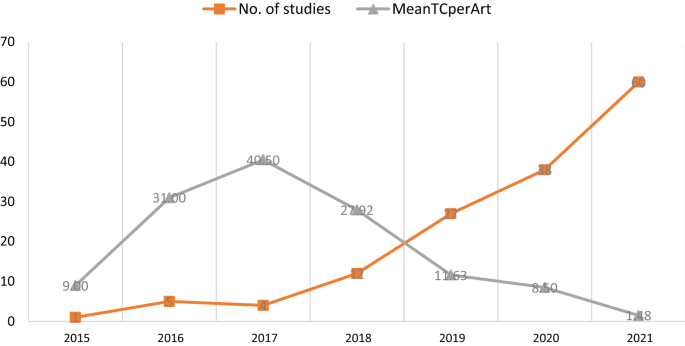 Figure 1 depicts the publications trend in MASS research, excluding the pure technology development studies. The number of publications has been growing significantly during our sample period, at an average yearly growth rate of 10.41%. The mean total citations per article (MeanTCperArt) scores are higher in the early years, as it usually takes a few years for publications to get attention and be cited.

Figure 2 presents the ranking of countries based on the number of publications. Norway, China, Finland, South Korea, and Poland are the top five. In this special issue, studies are authored by scholars from these countries, represented either by their affiliation or nationality, or both. 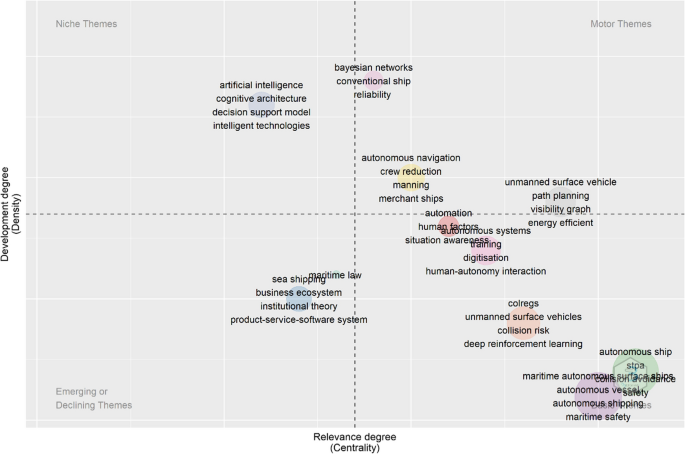 Based on Fig. 3, basic themes in MASS literature are mainly shaped around the safety of MASS. The successful adoption and growth of MASS on a larger industrial scale would require maritime safety levels at least at par or higher with conventional ships. Studies related to collision avoidance, situational awareness, and human factors shape the basic theme.

The motor themes include crew reduction, reliability, and energy efficiency dimensions. Reducing operational costs and increasing the reliability of shipping services are two major drivers of MASS development. Manning costs are around 40% of the total operating costs of a ship, hence, MASS has significant potential for operating costs reduction