Home / Articles / Ports : The port of Gdansk does not slow down the investments during the COVID-19

Ports : The port of Gdansk does not slow down the investments during the COVID-19

The Port of Gdansk terminals during the COVID-19 pandemic operate without interruption. Ships enter port in accordance with the revised plan

By and photo : MAREK GRZYBOWSKI

The Port of Gdansk terminals during the COVID-19 pandemic operate without interruption. Ships enter port in accordance with the revised plan. The port is investing in the construction of the new quays and road and rail infrastructure. The port widens the waterway for ships.

Procedures are in place to ensure the safety of terminal workers and customers and ship crews. Port administration runs on a remote work system. After a record-breaking 2019, in which terminals handled over 52.15 million tons of cargo, the port has been operating under the pressure of turbulence on the maritime transport market since the first half of this year.

“Terminals and the Port of Gdansk Authority operate smoothly and full operational capability is maintained,” says

Transhipments in Gdańsk in the first quarter of this year were smaller by 8.3% compared to the same period of the previous year. The dockers handled nearly 11.3 million tons of general cargo, bulk and liquid cargo at the terminals. Over 760 ships moored in Gdańsk terminals. 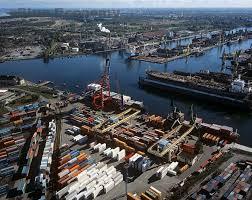 “This level of decline is comparable to the level of decline currently recorded by the largest European port in Rotterdam. The Port of Gdansk is a part of the global economy, ocean lines connect us with global trade. It suffers from lower demand  in the era of COVID-19,” explains President Łukasz Greinke.

Grain transhipments more than doubled and LPG was pumped by about 30% more, compared to the previous year. Conveyors and cranes reloaded by almost 6.5% more dry bulk cargo in the first quarter of this year. A decrease was noted in other loading groups. Fuel transhipments were smaller by about 17%, coal by 27.5% and general cargo by 1.2% than in the first quarter of last year. Container cranes moved 2% fewer containers, approaching 500,000 TEU. The pandemic severely affected ferry traffic, as a result of which ro-ro transport decreased by around 24%.

Investments. Investments with a total value of PLN 3.5 billion are carried out in the port of Gdansk, including works on wharfs and fairways. Access from the land will be improved thanks to the railway investments of PKP Polskie Linie Kolejowe. Over 70 km of tracks are under reconstruction. 3 bridges and 2 viaducts are rebuilt.